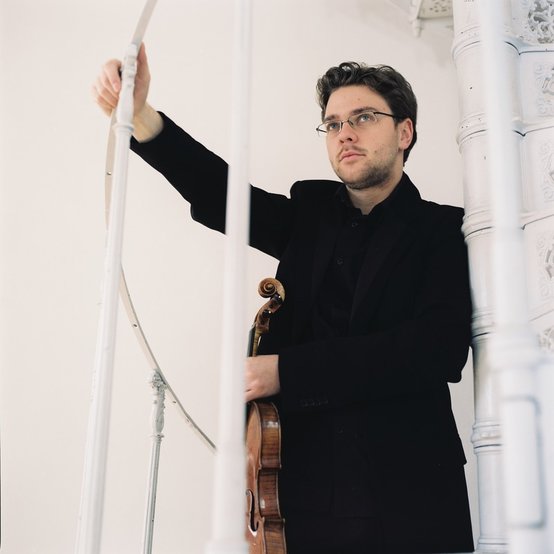 Alexander Sitkovetsky was born in Moscow into a family with an established musical tradition and made his concerto debut at the age of eight and the same year came to study at the Menuhin School. Lord Menuhin was his inspiration throughout his school years and they performed together on several occasions including the Bach Double Concerto, Bartok Duos at St James’ Palace, and when Alexander played the Mendelssohn concerto under Menuhin’s baton.
He has gone on to perform with the Netherlands Philharmonic, the Philharmonia, Royal Philharmonic, London Mozart Players, Konzerthaus Orchester Berlin, Brussels Philharmonic, the European Union Chamber Orchestra, Malmo Symphony Orchestra, Anhaltische Philharmonie Dessau, Academy of St. Martin’s in the Fields, Moscow Chamber Orchestra, Mulhouse Symphony Orchestra, Stuttgart Chamber Orchestra, Lithuanian Chamber Orchestra, St Petersburg Symphony, Welsh National Opera and the BBC Concert Orchestra among many others. Conductors he has worked with have included Sir Mark Elder, Yakov Kreizberg, Dmitry Sitkovetsky, Denis Russell Davies, Andrew Sewell, Alexander Dmitriev, Mark Soustrot, Julia Jones, Michel Tabachnik, George Hanson and Joseph Swensen.
This season, Alexander will make his debut in Brussels, Poznan, Santa Cruz in Bolivia and St Petersburg as well as going on two nationwide tours of the UK with the Brussels Philharmonic and St Petersburg Symphony. He will  be touring Australia with the Australian Chamber Orchestra and will also perform with the Royal Philharmonic Orchestra at the Royal Albert Hall. He will return to the Kuhmo and Cheltenham Festivals and make debuts at the Verbier and Lockenhaus Festivals
His new recording for CPO of Andrzej Panufnik's Violin Concerto to commemorate the composer's 100th Birthday has been critically acclaimed and he will perform the work this season with various orchestras including the Norwegian Chamber Orchestra, the Poznan Philharmonic and the Riga Sinfonietta.
He has also recorded for Angel/EMI, Decca, Orfeo, Onyx, BIS and Avanti Classics including the Bach Double Concerto with Julia Fischer.
In 2011, Alexander was awarded the 1st prize at the Trio di Trieste Duo Competition with the pianist Wu Qian, with whom he subsequently embarked on a twenty concert tour in Italy as well as a recital at the Weill Hall in Carnegie Hall. He is also a member of the prestigious "Chamber Music Society Two" program at the Lincoln Centre in New York.
Chamber music has always been very important to Alexander. He is a founding member of the Sitkovetsky Piano Trio with the pianist Wu Qian and cellist Leonard Elschenbroich, with whom he has won various prizes including the Mecklenburg Vorpommern Kammermusik Prize and has performed all over the UK and Europe including at the Frankfurt Alte Oper, the Concertgebouw in Amsterdam and the Wigmore Hall in London. The trio's debut CD of Czech Repertoire for BIS had stellar reviews and their follow up recording of Mendelssohn Trios will be released in 2015. They have also released a disc of Brahms and Schubert on the Wigmore Live Label.
Since 2012, he has also played in a String Quartet project with Julia Fischer, meeting once a year to perform in some of Europe's most prestigious venues.
Alexander has also shared the stage with Julia Fischer, Janine Jansen, Maxim Rysanov, Alexander Chaushian, Misha Maisky, Natalie Clein, Eric Le Sage, Polina Leschenko, Julian Rachlin, Boris Brovtsyn, and many others. He also performs regularly with the Razumovsky Ensemble and the Ensemble RARO.