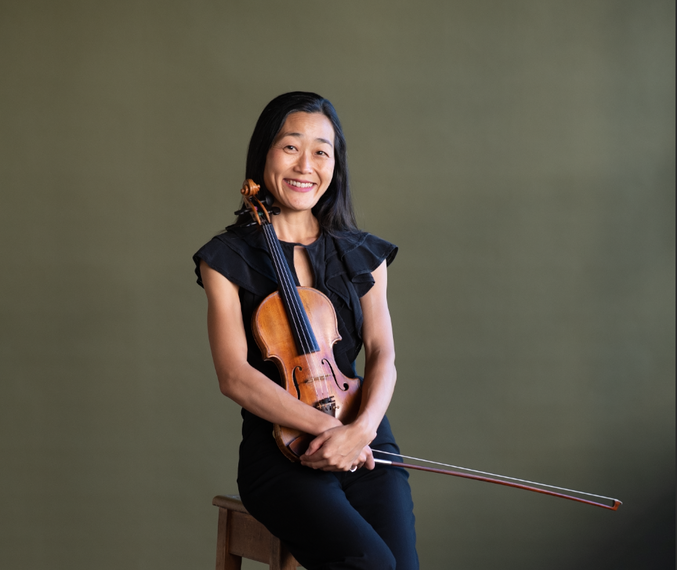 Born in Japan, Natsuko began playing the violin at the age of three. She studied at the Yehudi Menuhin School and Royal Northern College of Music in England and the Curtis Institute of Music in Philadelphia.  She received direct guidance and teaching under Lord Menuhin and Wen Zhou Li.

She has won many prizes in international competitions including the Wieniawski, Menuhin and Tibor Varga and the Gold Medal in both the prestigious 1994 Shell/London Symphony Orchestra Competition and the Orchestra Ensemble Kanazawa Award and the Iwaki Award for outstanding achievement as a Japanese artist.

Until 2020 Natsuko held the position of Concertmaster with the Adelaide Symphony Orchestra, and has recently accepted an engagement as Co-Concertmaster of the Queensland Symphony Orchestra. She frequently appears as guest Concertmaster with other major orchestras in Australia and Asia. She was the leader of the Australian String Quartet and then the Grainger Quartet until the end of 2008. She has performed and collaborated in chamber music with many illustrious musicians including Pinchas Zukerman, Heinz Holliger, Anthony Marwood, Cristina Ortiz, Jonathan Kelly, Li-Wei Qin and Brett Dean and continues to perform chamber music regularly as a guest artist with various groups and musicians.

Natsuko is also a passionate teacher and has given masterclasses in many renowned institutions such as Royal Northern College of Music, Shanghai, Beijing Conservatories and Hong Kong Performing Arts and teaches violin and chamber music at the Conservatorium of Music in Queensland and at the University of Queensland.

She has given many world premieres of works by Australia's most prominent composers and has recorded for Virgin Classics, ABC Classics, Melba Records and Tall Poppies.

Natsuko currently plays on a Giovanni Battista Guadagnini generously on loan from the South Australia Guadagnini Violin Trust and Ukaria.