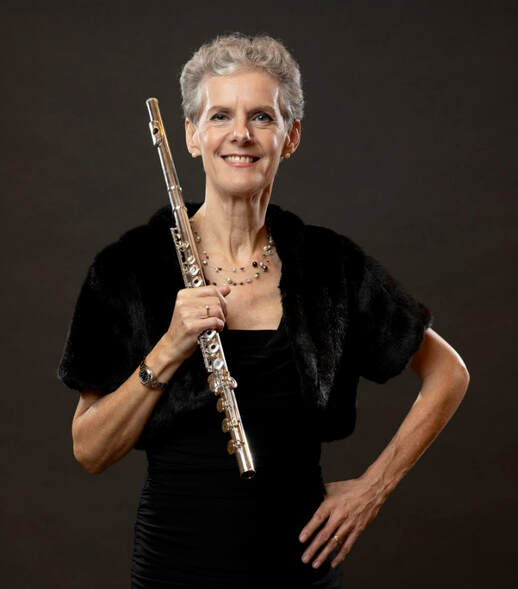 Hailing from Melbourne, Alison Mitchell is delighted to have returned to Australia as the recently appointed Section Principal Flute with Queensland Symphony Orchestra.
Alison leads a vibrant career throughout Australia and Europe as orchestral musician, chamber player, soloist and teacher. She studied in Basel with renowned Swiss flautist Peter-Lukas Graf before moving to the UK where she was appointed to the position of Principal Flute with the Orchestra of Scottish Oper, with whom she performed for five years before embarking on a freelance career dedicated to solo and chamber music performances. From there an opportunity arose for her to return to Australia to take up the position of Associate Principal Flute of Sydney Symphony Orchestra. During this period she also performed regularly as Guest Principal with orchestras around Australia..
Alison returned to Scotland in 2003 to join the Scottish Chamber Orchestra as Principal Flute. She performed and recorded regularly with SCO chamber ensembles and as a concerto soloist. She has performed all the major flute concertos including concertos by Mozart, Bach, CPE Bach, Nielsen, Ibert, Poulenc, Osborne, Boulez, Cimarosa and Honegger and her recording of Mozart’s Flute Concerto with the SCO (Linn) received glowing reviews. Mitchell also premiered a wonderful new flute concerto written especially for her and the SCO by the Australian composer, Gordon Kerry.
Whilst living abroad, Alison was continually sought after to perform in Australia. In 2017, she was invited to perform the Australian premiere of the Kerry concerto with the Tasmanian Symphony Orchestra. She is honoured to be a founder member of the Australian World Orchestra having performed with them under Zubin Mehta and Sir Simon Rattle and she has also recorded and performed regularly with the, highly regarded, Australian Chamber Orchestra both internationally and throughout Australia. The ACO recording of Bach’s Brandenburg Concerto No.5 and the Triple Concerto for flute, violin and piano where Alison joined Angela Hewitt and Richard Tognetti was a Gramophone Editor’s Choice.
Alison is very involved in Queensland Symphony Orchestra’s education programme and is sought-after to give masterclasses and specialist woodwind coaching. Until her return to Australia she was Lecturer in Flute at the Royal Conservatoire of Scotland.