To read full reviews, please click on each snapshot below

"Every so often a new work comes along that makes us all sit up and take notice, startled as we do so; Paul Dean’s concerto for cello and wind quintet is such a piece. It is gritty, lyrical, compelling, and in Trish Dean, has a phenomenal advocate. She is well-matched by Paul and the other members of Ensemble Q, a sharp-shooting group of renowned wind soloists in Brisbane, brought together out of the desire to create a collection of ‘exceptional players and wonderful people’.
Paul Kildea, Musica Viva 2021
read more here

​Concert of quality shows what can be done online

Music / Ensemble Q, Musica Viva’s Online Discovery Series, August 23. Reviewed by ROB KENNEDY.LIVE music -- yes really -- streamed from Queensland, as Ensemble Q, which was to play in Canberra today (August 24) gave a taste of their enthralling sound in a concert streamed online yesterday.
Ensemble Q is an Australian collective group. They performed in the Queensland Symphony Orchestra Studio in Brisbane for more than 250 people. Formed in 2017 by Paul and Trish Dean they now include former Canberran Virginia Taylor, who was the associate Professor of flute at the Australian National University for more than 25 years.
Performing in Ensemble Q were Paul Dean clarinet and artistic director, Trish Dean cello and artistic director, Virginia Taylor flute, Huw Jones oboe, Peter Luff horn, David Mitchell bassoon.
Watching and hearing an online concert is best with a quality screen and speakers. Fortunately, with my home music studio, I have both, and the experience made the music come alive. Beginning with “Syrinx” by Debussy for solo flute played by Taylor, the floating suspended sound of this music echoed warmly and clearly, so much so I could hear every breath. Sublime.
Beethoven’s “Variations” on “Là ci darem la mano” for oboe, cello, and clarinet sounded just like being there. This highly enjoyable and playful music had an even balance across the instruments, and it stood out for its cheeky tunes. The animated performance and their timing were exquisite.
For piccolo and flute, oboe, bassoon and French horn, Ligeti’s, “Six Bagatelles for wind quintet” sounded dynamic, plus hilarious in places. Sometimes complex, sometimes clashing, but this always interesting music captivated. There is a clever use of individual sonorities throughout this dynamic music. These Bagatelles raced and glided with effecting writing and excellent playing.
“Ciaccona” from Second Suite for Cello, Op. 80 by Britten mirrored the Ligeti work for animated writing. The dexterity it takes to perform this contrasting and complex piece seemed to flow naturally for Trish Dean on cello. She made her instrument speak.
Seeing fingers perform vibrato, glissando and pizzicato up close was a music lesson that you cannot get in a concert hall. Hearing each string resonate and slowly die away was an ethereal experience.
Samuel Barber’s “Summer Music”, for the five wind players, sat well with the other 20th-century pieces. The depths of beauty in this work closely reflect the shimmering heat and slowness of a long hot summer’s day. Ensemble Q worked so well together in this and all the pieces; they are world-class players.
Paul Dean’s “Concerto for Cello and Wind Quintet” is a multi-layered work that included the bass and regular clarinet, played by Dean himself. The complex, dense language in this music is unlike most of the music composed today. At times, it was like a conversation for six instruments with the cello at its centre. Each instrument stood out, even when they were all playing at the same time, which shows a great understanding of tonalities. This atmospheric music floated with a deeply intense presence.
If this was the quality of all online concerts, the production, the sound quality and the playing were all first-rate, it might be hard to entice people out of their homes again to attend a music hall.
A recording of the concert can be accessed here until 8.30pm, August 25, 8:30pm.
​REVIEW
AUGUST 24, 2021
CITY NEWS, CANBERRA 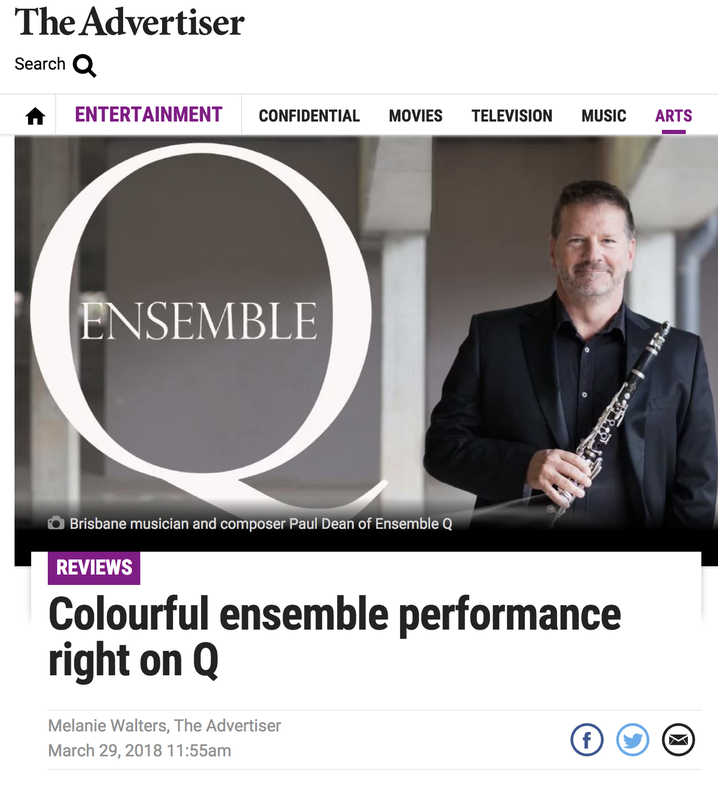 FEATURES
PAUL DEAN’S BRAND NEW ENSEMBLE Q HITS BRISBANE
​by Angus McPherson on May 24, 2017
The clarinettist and Head of Wind at Queensland Con hopes to make Brisbane the home of chamber music in Australia. For clarinetist Paul Dean, the inspiration to found a brand new chamber music ensemble – dubbed Ensemble Q – at the Queensland Conservatorium was driven by “a real desire to get it right.”
“Every group I have been a part of in my life has had to make sacrifices either in repertoire choices or standards,” he explains, “and my partner Trish O’Brien (cello) and I just decided it was time to finally play chamber music with the best players, programme wonderful music and support young Australia musicians and composers – all to the very highest level.”
read more...