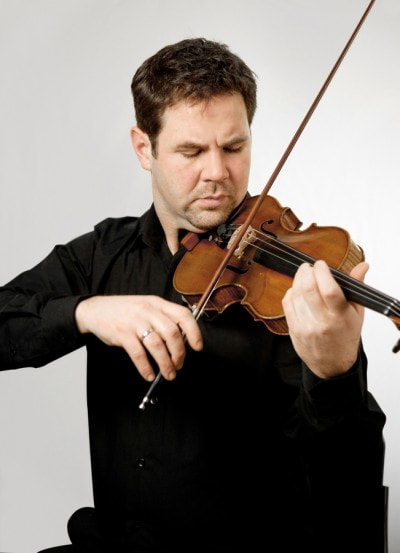 Andrew Haveron has established himself as one of the most sought after violinists of his generation. The highest British prize-winner at the prestigious 'Paganini' competition for the last fifty years, Andrew studied in London at the Purcell School and the Royal College of Music. With unrivalled versatility Andrew is a highly respected soloist, chamber musician and concertmaster. As a soloist Andrew has performed concertos with conductors such as Sir Colin Davis, Sir Roger Norrington, Jiří Bělohlávek, Stanislaw Skrowachewski, David Robertson and John Wilson, performing a broad range of well known and less familiar repertoire with many of the UK’s finest orchestras.
In 1999 Andrew was appointed first violinist of the internationally acclaimed Brodsky Quartet. A busy schedule saw the quartet perform and broadcast in their unique style all over the world collaborating with outstanding artists and commissioning many new works from today’s composers. Also famed for their iconic ‘cross-genre’ projects the quartet enjoyed barrier-breaking work with Elvis Costello, Björk, Paul McCartney and Sting. Andrew recorded more than fifteen albums with the quartet, many of which received industry awards such as "Diapason d'or" and "Choc du Monde". Andrew has also appeared with numerous other groups such as the Nash and Hebrides ensembles, the Logos Chamber Group, Kathy Selby and the Omega Ensemble.
Andrew is also in great demand as a concertmaster and director and has worked with all the major symphony orchestras in the UK and many further afield. In July 2007 he became concertmaster of the BBC Symphony Orchestra, broadcasting frequently on BBC Radio and enjoying many appearances at the BBC Proms including the famous “Last Night”. Joining the Philharmonia Orchestra in 2012 Andrew also led the 'World Orchestra for Peace’ at the request of its conductor Valery Gergiev. He has also been the leader of ‘The John Wilson Orchestra’ since its inception. Most recently, Andrew has taken up his new role as concertmaster of the Sydney Symphony Orchestra. Alongside his work in Australia this season Andrew will also be appearing with orchestras in Singapore, Hong Kong and London and will also be touring with The Academy of St. Martin in the Fields.
In 2004 Andrew received an honorary Doctorate from the University of Kent for his services to music. He plays on a violin made in 1757 by G B Guadagnini; a generous loan to the Sydney Symphony Orchestra by Vicki Olsson for Andrew's use.