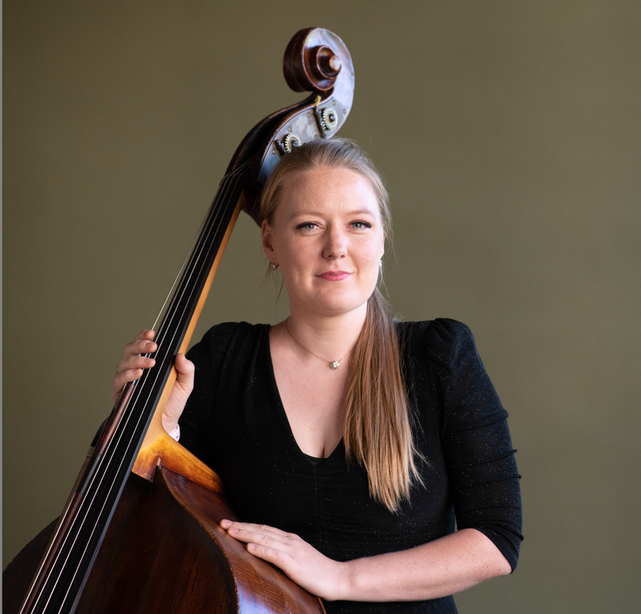 Double bassist Phoebe Russell enjoys a career as an active soloist, performer and
educator.
Born in Melbourne, Australia, Phoebe studied at the Australian National Academy of Music
under the tutelage of Damien Eckersley. At the age of 17 she moved to Berlin and within
months made her debut in the esteemed double bass section of the Berlin Philharmonic. A
graduate of Berlin Philharmonic’s Karajan Academy, Phoebe has performed in more than
twenty countries across the globe with some of the world’s leading orchestras. The last
few years have seen her perform with the Bavarian Radio Symphony Orchestra, the Radio
Symphony Orchestra Berlin, Deutsches Symphonie Orchester, the Netherlands
Philharmonic and the Mahler Chamber Orchestra among others.
In 2017 Phoebe was appointed principal double bass of the Queensland Symphony
Orchestra and is regularly invited to orchestras as a guest principal. She has been invited
to perform as principal double bass with many Australian symphony orchestra and has
most recently returned from a Europe tour leading the double bass section of the Mahler
Chamber Orchestra. She has had the privilege of working under several world class
conductors, some personal favourites including Sir Simon Rattle, Gustavo Dudamel,
Andris Nelsons, Daniel Barenboim and Zubin Mehta.
An avid soloist, Phoebe is regularly invited to perform as recitalist in Australia and abroad
including to a full house in the Berlin Philharmonic lunch concert series. She has
performed as soloist with orchestras including the Tasmanian and Canberra Symphony
Orchestras, the Baden Baden Philharmonic and  the Queensland Symphony Orchestra.
Phoebe is an active member of Ensemble Q, one of Australia’s most dynamic new ensembles and enjoys an engaging schedule of chamber music collaborations in Brisbane and around the country with world class musicians.
Parallel to her busy performance schedule, Phoebe is a passionate educator and is the lecturer in double bass at the University of Queensland and a faculty member of the Queensland Conservatorium of Music. She has coached the Australian Youth Orchestra’s National Music Camp, given classes at the Guildhall School of Music in London, the Melbourne and Sydney Conservatoriums of Music, the Australian National Academy of Music and at the Pontificia Universidad Javeriana in Bogotá.