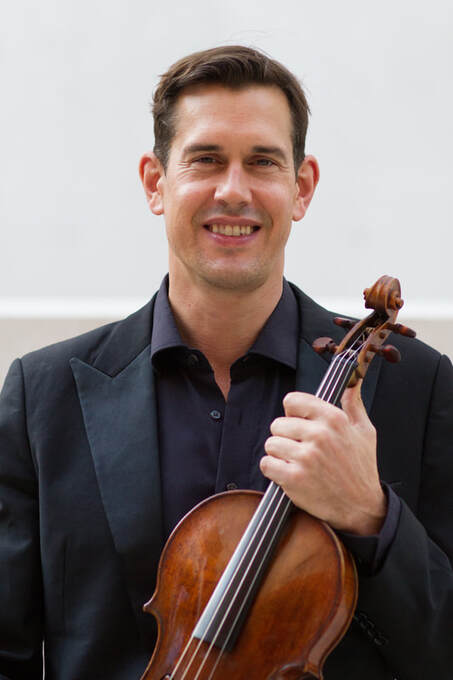 German violist Tobias Breider was born in the city of Münster and had violin and piano lessons from the age of six. He studied viola with Rainer Moog in Cologne, completing his Master's degree with high distinction. His intensive study of chamber music has included lessons with the Alban Berg Quartet, the Juilliard String Quartet, Sarah Nelsova and Miriam Fried, among others.
A German Academic Exchange Service (DAAD) scholarship allowed him to continue his studies in New York with Michael Tree of the Guarneri Quartet. Following his return to Germany he completed the Soloist Program in Lübeck with Barbara Westphal.
He has been invited to appear in festivals in the US, Germany, the UK and South Africa. Since his arrival in Australia he has performed chamber music with artists such as Kathy Selby, Ian Munroe, Paul Wright, Howard Penny, Brett Dean, Timo-Veikko Valve, Elizabeth Layton, Timothy Young, James Crabb and Sara McLiver a.o.
Tobias collaborated with Wilma Smith & Friends and toured Australia with Kathrin Selby & Friends. He was invited to the Sydney Chamber Music Festival, the Sanguine Estate and Pearl Beach Festivals, the Australian International Viola Conference and to Viola Week at ANAM.
Tobias Breider was a member of the Bavarian Radio Symphony Orchestra for seven years, working with such conductors as Lorin Maazel and Mariss Jansons. He held Principal Viola positions at the Rhine Opera Duesseldorf, the Konzerthaus Berlin and in the Philharmonic State Orchestra Hamburg under Simone Young, before joining the Sydney Symphony Orchestra in 2011. He has also appeared as guest principal with the Leipzig Gewandhaus Orchestra, both Radio Symphony Orchestras of Berlin, the Radio Symphonies of Vienna and Cologne, the Qatar Philharmonic and the Melbourne Symphony. He has taught at the Britten/Pears School at Aldebourgh and in Stellenbosch and is currently teaching viola at the Conservatory of Music and as a guest teacher at ANAM. He holds the position of Principal Viola with the Sydney Symphony.

Due to COVID19 restrictions, we were unable to bring Tobi to Brisbane from 2020, however we are delighted that he is able to join us at the Hume Chamber Music Festival and at Four Winds in Bermagui in September 2021.